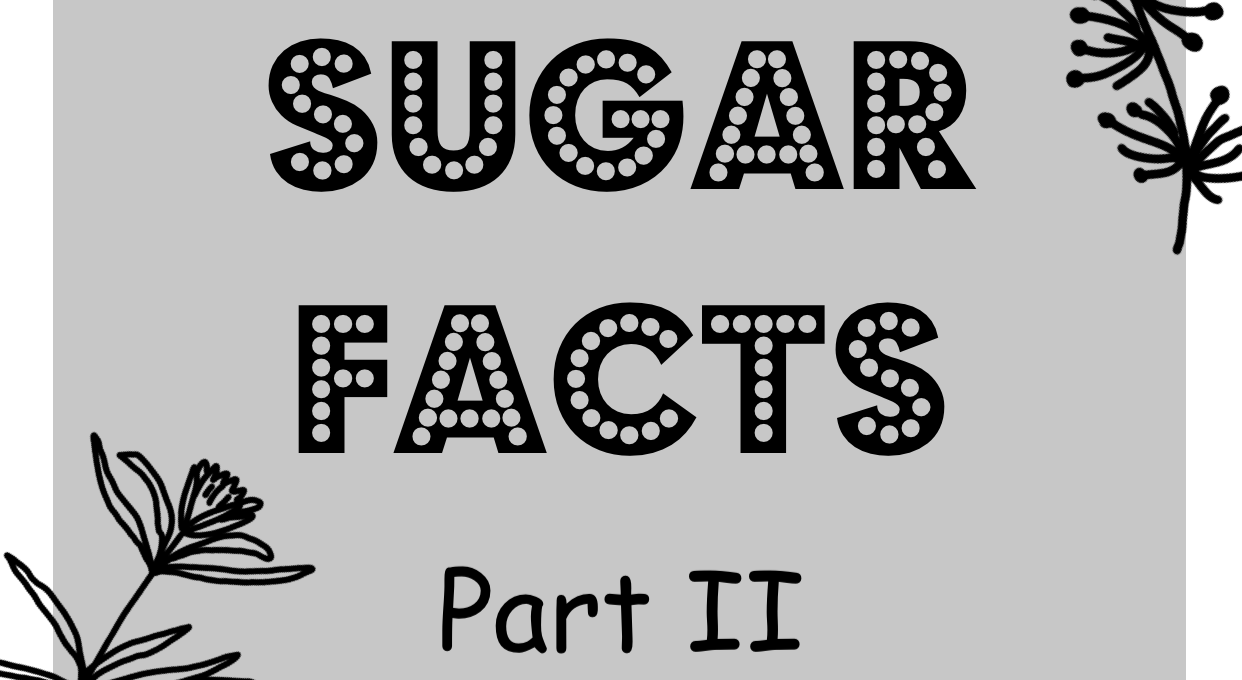 Here is the first real blog entry on the subject of “sugar” and “sugar alternatives”!

This post is about What sugar actually is(I am explaining the different types of sugar here) and how fructose and glucose behave in our body.

What exactly is sugar anyway?

Sugar is one of the carbohydrates, is naturally colorless, but appears white due to the refraction of light, and usually has a crystalline structure (food dictionary.de, 2014). There are different types of sugar that all belong to the same group of substances, the so-called carbohydrates (Yudkin & Lustig, 2012, p. 29). Depending on the number of chemical components, carbohydrates are divided into single sugars (= monosaccharides), double sugars (= disaccharides) or multiple sugars (= polysaccharides) (food xikon.de, 2014).

Monosaccharides (mono= `one`, sacchar= `sweet`) are simple sugars, which consist of only a single unit of sugar. This type of sugar includes glucose (= dextrose), fructose (= fruit sugar) and galactose (= mucilaginous sugar). Fructose is found in fruits, but also in vegetables, honey, table sugar and other sugar alternatives (e.g. agave syrup, coconut blossom sugar, palm sugar, maple syrup, etc.). Galactose, on the other hand, is a part of lactose known as milk sugar. Glucose is also found in fruits and vegetables, usually in combination with other types of sugar. It is the most important source of energy in all organisms concerning animals, plants and human beings. Glucose is produced by plants during photosynthesis. As a supplier of energy, glucose plays also a central role in our body: An adult human being needs an average of about 200 g of glucose per day, 75% of which is consumed by the brain. However, to achieve this amount, NO extra sugar needs to be consumed, as the basic foods (e.g. rice, pasta, bread, etc.) are converted by our body into glucose. It is then processed immediately into energy. If there is currently no need for energy, glucose can also be stored - with the help of insulin - as glycogen in the so-called glycogen synthesis. Glycogen is composed of many monosaccharide units (= polysaccharides - see below) and stored into the liver and muscles, where it waits to be released again in case of a drop in blood sugar. However, only very small amounts, hardly more than 350 grams, of glycogen are stored in the human body. Glucose is therefore constantly present in the bloodstream known as blood sugar. This blood sugar level is kept balanced by a complicated interplay of hormones. This is how it works: During digestion, the glucose is released and absorbed by the blood, which in turn causes the blood sugar level to rise. At the same time, the pancreas sends out glucose (= dextrose) to lower the blood sugar level back to a normal level. If, on the other hand, the blood sugar level drops (for example, if you do not eat anything for a long period of time), the stored glycogen is released from the liver and muscles and supplied to the cells, organs and muscles (DocCheck Flexikon, 2017; Yudkin & Lustig, 2012, p. 29f.). This process is described more detailed in the blogpost "What exactly is insulin and how does it work? " .

Disaccharides (di= `two`, sacchar= `sweet`) consist of two units of sugar. Common disaccharides include lactose, maltose, and sucrose. Maltose (= malt sugar) is an intermediate product formed during the splitting of starch as it occurs for example in the production of beer. Lactose (= milk sugar) is found naturally in milk. Sucrose (= table sugar) is the most common disaccharide. It is composed of one part fructose and one part glucose (two units of sugar = disaccharide). In order to be able to digest a disaccharide sugar, it must first be split into its two individual components (e.g. fructose and glucose) (lebensmittellexikon.de, 2014; Yudkin & Lustig, 2012, p. 30). About 99 percent of the sugar we consume is obtained from sugar beet or sugar cane. The remaining percent is divided among sugar alternatives such as maple syrup, date syrup, coconut blossom sugar, agave syrup, etc. (Yudkin & Lustig, 2012, p. 31). Since glucose, as already described above, provides our body with energy, it is mainly fructose, that is responsible for various negative effects in our body (lebensmittellexikon.de, XNUMX; Yudkin & Lustig, XNUMX, p. XNUMX). What exactly these effects are will be discussed in the blogpost

Since glucose, as already described above, provides our body with energy, it is mainly fructose, that is responsible for various negative effects in our body (lebensmittellexikon.de, 2014; Yudkin & Lustig, 2012, p. 30). What exactly these effects are will be discussed in the blogpost "Negative Effects of an Excessive Sugar Consumption" .

A long chain of monosaccharides linked by many interconnected glucose units is known as polysaccharide (ploy= `many`, sacchar= `sweet`). Polysaccharides include for example starch, cellulose and glycogen. Starch is the stored form of sugar in plants. Glycogen is also a polysaccharide, as described above (Yudkin & Lustig, 2012, p. 30). Cellulose is an important structural component of the primary cell wall of green plants (Wikipedia, XNUMX).

Here you will find an overview of the types of sugar, their composition and their occurrence: 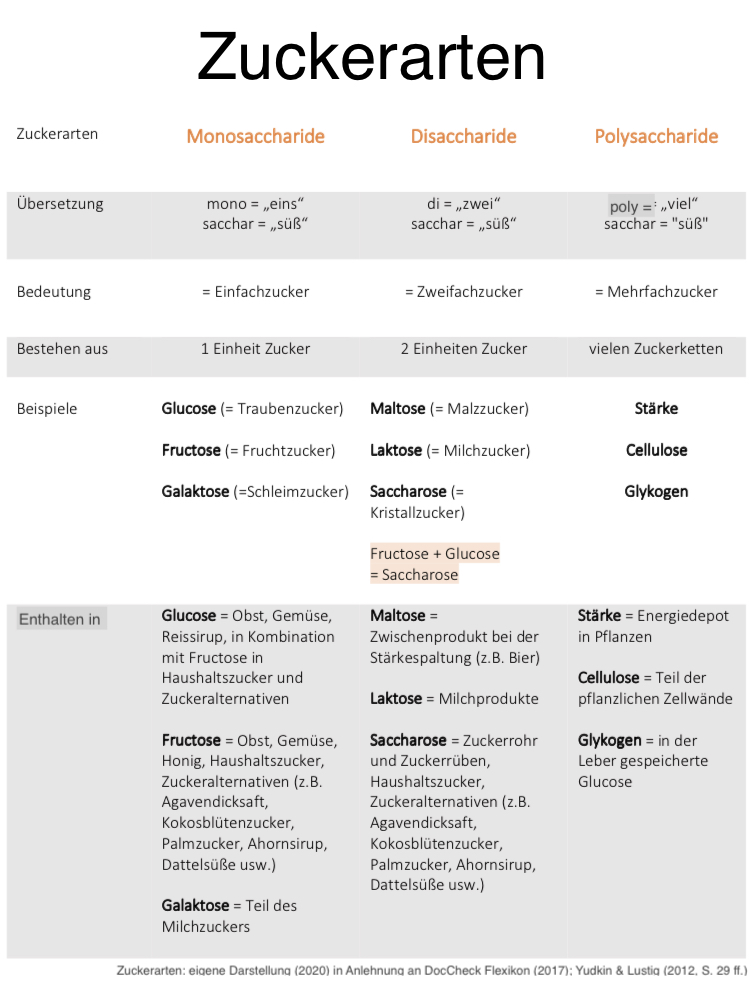 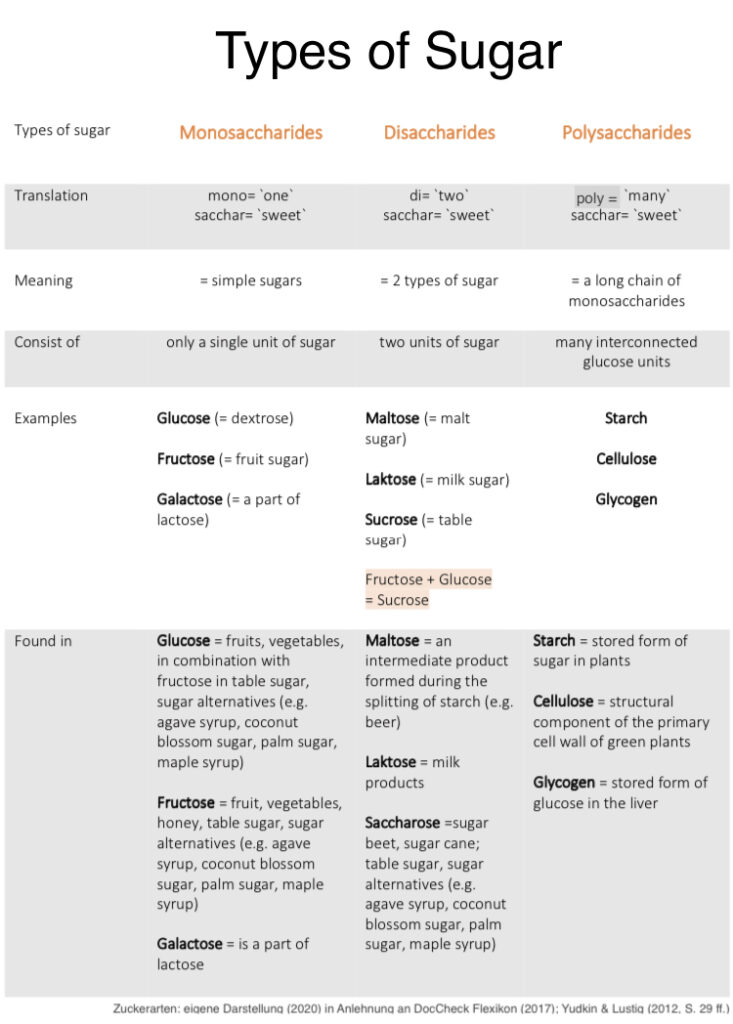 You can also find this table on my Instagram feed. Please feel free to save it for later, in case you want to read about some of these facts ♡

How are glucose and fructose metabolized in the body? Is there a difference?

As already described above, table sugar (= sucrose; disaccharides) consists of one part glucose (= dextrose) and one part fructose (= fruit sugar). After the sugar has been eaten, enzymes are splitting it into its two individual components: glucose and fructose. Both types of sugar are then absorbed by the bloodstream. Our body needs glucosein order to survive. It is therefore transported to the brain and cells to supply them with energy. The liver also needs some of it, which it uses as an energy source as well. If there is an excess of glucose , it is converted into glycogen , which is then stored in the liver. It can be used whenever there is a drop in energy (Gameau, 2015, p. 109). However, as already explained above, only relatively small amounts, hardly more than 350 grams, of glycogen are stored in the human body (DocCheck Flexikon, 2017; Yudkin & Lustig, 2012, p. 29f.). Glycogen can therefore be regarded as a kind of "battery": when we eat, glycogen is stored, i.e. the battery is charged. If we do not eat, the sugar that is still present in the bloodstream is first used up before the battery, the glycogen storage of the liver, can be tapped. (Gameau, 2015, p. 109). In this way, our body burns fat: it is taken from the liver and supplied to the cells, organs and muscles (Standard, 2017). Glucose, as an important source of energy, is thus constantly present in the bloodstream. At this point I would like to point out again that in order to be supplied with glucose, we do not have to eat sugar at all: as already explained, most of the foods (rice, pasta, bread, etc.) that we eat are converted into glucose anyway (DocCheck Flexikon, 2017; Yudkin & Lustig, 2012, p. 29f.). And even if we do not consume carbohydrates at all, the body is capable of producing glucose itself. Relying on the fact that humans eat enough carbohydrates, which the body can then convert into glucose to supply the brain and cells with energy, would simply be much too risky and not very clever. For this reason, the body secures the supply of its glucose dependent cells by producing glucose itself. Metaphorically speaking, the body can be compared with a factory here: in addition to the regular energy supply, there are also emergency power generators that can be tapped in the event of a power failure - or in this case, when there is no carbohydrate supply. The body does therefore not dependent on carbohydrates at all. A component of nutrition is called "healthy" if it is indispensable for the human organism or at least brings more advantages than disadvantages. This is not the case with carbohydrates, and especially not with sugar! In contrast to fat and protein, we do not need carbohydrates in order to survive (Kämmerer, Schlatterer & Knoll, 2020, p. 22).

To sum it up, glucose is essential for life, as it supplies the brain and cells with energy. It is therefore constantly present in the bloodstream to ensure a fast and efficient supply of energy. In case of an excess, only a very small amount of glucose is stored in the liver. If there is a drop in energy, this storage can be tapped. However, the body can also produce glucose completely on its own, which is why no extra carbohydrates need to be taken in.

Within the fructose works completely different: it is absorbed by the bloodstream and must be first transported to the liver in order to be used as fuel by the cells. It is therefore not constantly present in the bloodstream. The enzyme fructokinase works constantly, regardless of whether the liver or the rest of the body needs energy at all. It is always active and absorbs all of the fructose, which is available in the bloodstream. In certain extreme situations (e.g. after an extremely long eating break or during a marathon run) the body also converts fructose into glucose. Working out in the gym is therefore not sufficient enough to convert fructose (previously absorbed by our body) into usable glucose. When the glycogen battery is full, which does not have a particularly high storage capacity, the absorbed fructose is immediately converted into fat and stored in the liver. There is also no limited capacity here: the liver absorbs as much fructose as there is fructose available in the body. This means that the liver constantly stores fat. This is also the reason why there are people who do not drink alcohol at all and still have a fatty liver. That is also the reason why there are children with fatty liver - and they certainly do not drink alcohol (Gameau, 2015, p. 109)! Gameau (2015) cites values from Australia in his book "That Sugar Book": about 5,5 million Australians suffer from fatty liver today. Only in 6.000 cases alcohol consumption can be blamed (p. 108). According to an online article in the Oberösterreichische Nachrichten from 2019, one out of five Austrians has a non-alcoholic fatty liver (OÖNachrichten, 2019) and "about 4000 children and adolescents in Germany have an increased risk of early progressive liver fibrosis or cirrhosis" (Roeb et al., 2015, p. 672). Incidentally, this non-alcoholic fatty liver does not only occur in overweight people. Even very slim people can be affected (Bunte.de, 2017).

"The hummingbird is the only animal that can convert fructose directly into energy. Its wings beat about fifty times per second" (Gameau, 2015, p. 40).

This picture once again illustrates very clearly how much energy has to be expended in order to burn the absorbed fructose at all! 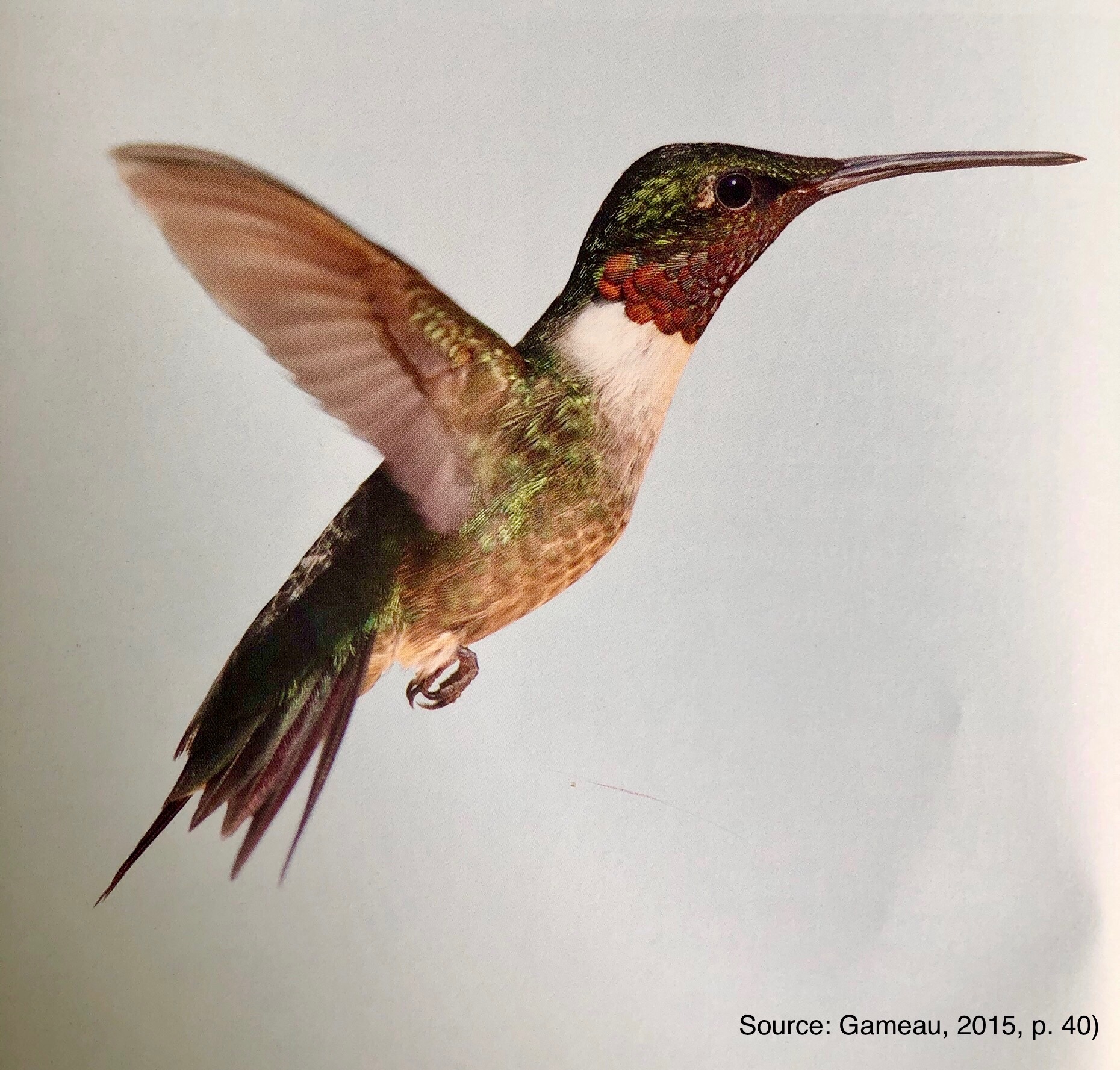 I hope this article was interesting and exciting for you to read. I´ve tried to explain the facts as compact and understandable as possible. The table about What sugar actually is (= Types of Sugar) displays the text again in compressed form. As already mentioned above, the next blog entries deal with the role of the hormone glucose (= dextrose) are available as assessories. Glycemic Index . 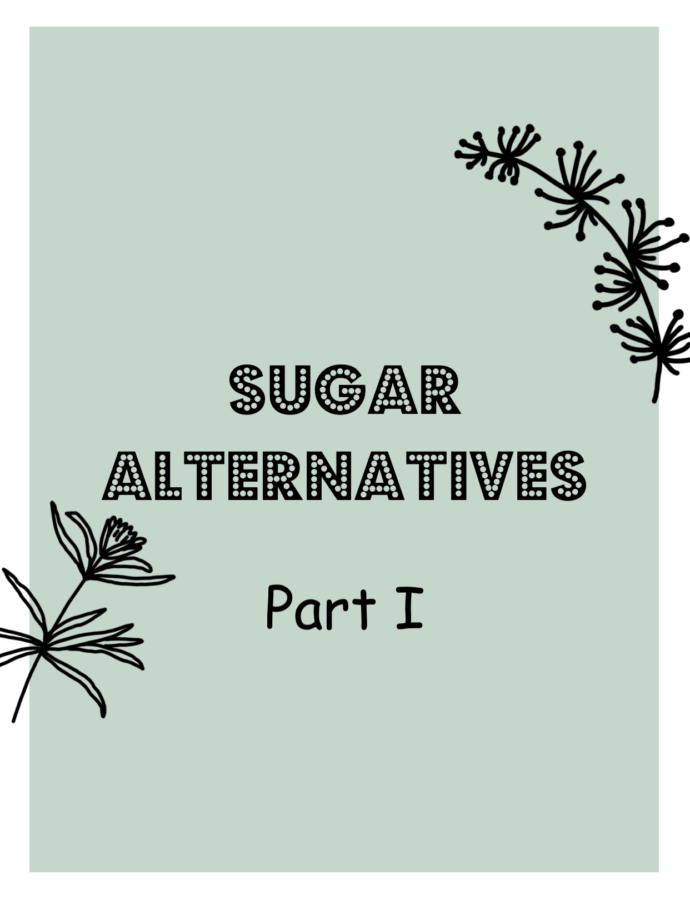 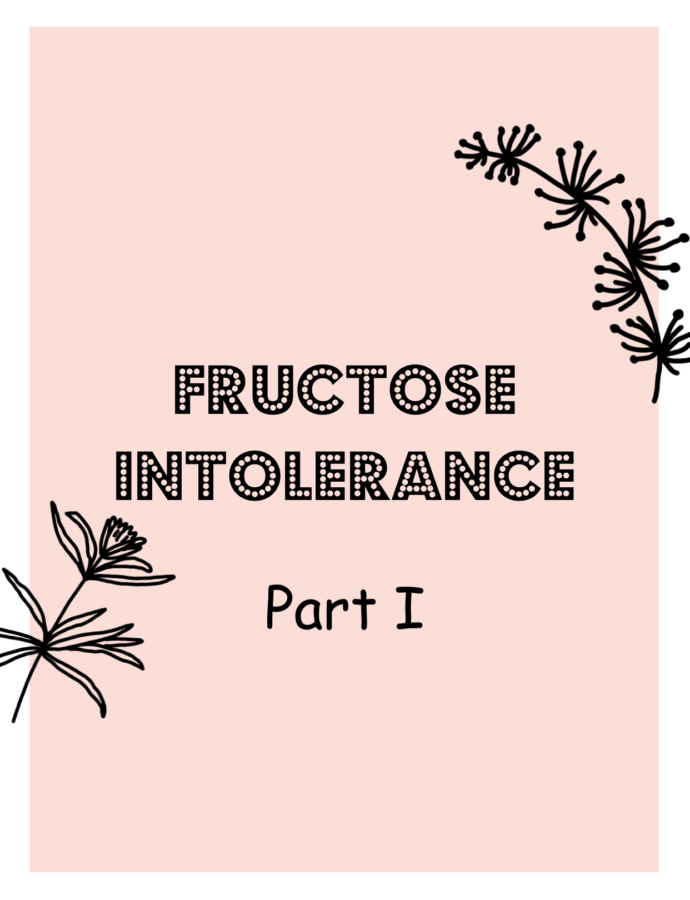 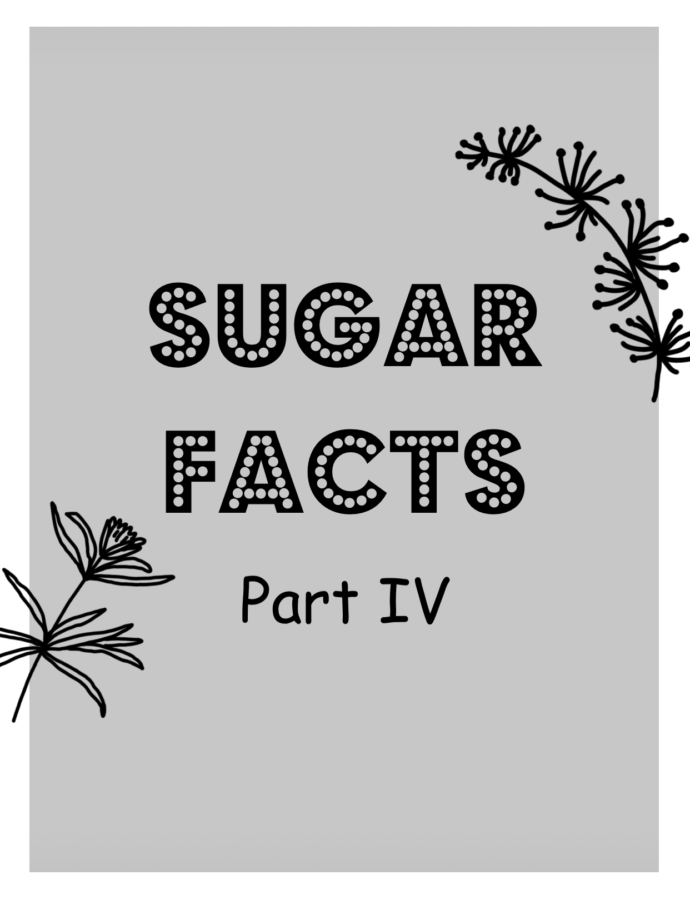